Slime crystals are crystalline beings from the Ascension Cave. These crystalline life forms don't represent a direct threat due to their passive behaviour, but that doesn't mean they are inoffensive. Encounters with slime crystals are very common near waterfalls or gaps, but they are also present into cramped corridors near abandoned goblin settlements.

Many adventures describe these creatures like a gelatinous mass with crystals around, and for a good reason. Slyme crystals have no legs or arms, they can move by crawling through the surfaces of the Ascension Cave, expanding and contracting their body. They are covered by sharp crystals that serve as a shield and a weapon at the same time.

Their crystalline shell can resist multiple melee and long distance hits. Even the most skilled of the warriors have several difficulties to break their protective barrier. Once their shield is broken and they are defeated they are still a threat due to the multiple crystals they shot just after dying.

As it is said before, slime crystals are passive life forms that don't attack directly like other wild creatures of the area like geodas or golems. If someone doesn't get in their way, there should be no problem at all. This feature, added to their slow movements when, means that the slime crystals can be drawn most of the time.

Try to avoid contacting them or falling off a platform near them and attack other enemies way more dangerous. If there is no other chance but to fight them, use long range attacks like the arrows and prepare to run for cover. Once they die, multiple cystals will be fired in all directions. 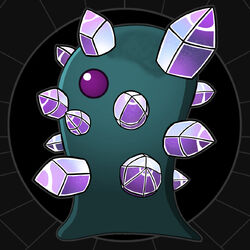 Slime crystals can move by contracting and extending their body

Screenshot of a slime crystal shooting crystals after dying