Skull warriors are the most common infantry troops of the skeleton army beside skull archers. They are easy to find all over Heroes' Rest and the sound they make when walking due to their heavy equipment is very recognizable. As a counterpart of skull archers, the skull warriors are specialized in melee combat but share the same behaviour that their archer comrades. Centuries ago, these skeleton fighters were famous warlords, acclaimed by their brothers in arms, whose deeds were saved in popular songs. Now the souls of these ancient heroes have lost any humanity, and patrol Heroes' Rest searching for innocent adventures and tomb raiders.

The names of each creature of the Skeleton Army are pretty self-explanatory. Their anatomy stands out for a total absence of skin or organic fresh parts. The only thing that has survived from his old body is his bone structure. Far from being flimsy, the skeleton is protected by heavy armour and a thick battle helmet, perfect for keeping bones safe. They also wear boots and gloves. Due to the nature of these troops, all that they wear is a heavier version than the one used by their fellow shooters. They must wear appropriate equipment for hand-to-hand combat.

The main weapon of the skull warriors is their sword, a sharp and large weapon deadly at short and medium ranges. The destructive power of this sword is complemented by the defensive capabilities of their gigantic shield, a huge wall made of wood and steel, capable of resisting direct impacts.

Some experts have described them as "two-legged fortresses". No matter how strong is their opponent, the shield they carry is almost indestructible so any attack, including arrows, in the direction they hold the shield is useless in most cases. They can hold the shield up or to the sides.

Skull warriors are heavy combat units, lethal in closed environments, but with some weak points in the open. Due to the weight of their battle gear, they have a slow movement speed, which makes them an easy target for anyone with good acrobatic skills like the King of Darkness. However, their back is the most sensible point. It is very little protected and is defenceless against melee or long-range attacks.

So, how can you deal with enemes that carry a massive shield? By hitting them in the back. Jump over them and use dash to get behind their huge body and use all your streght on their back. They will not take too long to turn and start attack so move fast and try to try to line up yourself with his back. Repeat three times and the skull warrior will be dead again and, hopefully, forever. 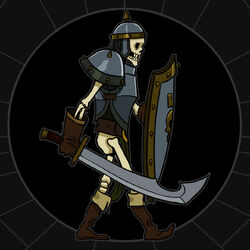