The troops of the Skeleton Army are diverse but lethal. Skull archers represent the most common mobile artillery units of this corrupted legion integrated by linches and skull warriors. Like any other undead creature, these lifeless archers are insane and have no mercy with their opponents. In the past, they were brave warriors, heroes who died in battle in the name of both light or darkness. Nowadays, skull archers are nothing but dehumanized bags of bones. The only memory of their glorious past is their perfect aiming abilities.

Describing an undead archer is an easy task. They lack any muscles or skin, not even rests of internal organs. Bones are the last remains of life in their bodies. Eye sockets are empty, which makes their look even more intimidating. The white and dusted skeleton of the skull archers is protected with a coat of mail and a light but resistant body armour. Their mindless head is covered by a battle helmet They wear their old battle uniform because, as a show of respect, they were buried in the same attire they used in combat. Boots and leather gloves complement their macabre appearance.

As their name suggests, they use bow and arrows as a weapon. Skull archers carry a quiver of arrows on their back and a handcrafted bow perfect for shooting at any distance.

Skull archers rarely miss a shot. Their aiming skills were well known in the past, and have not disappeared despite the centuries. These undead spawns have an excellent aim, even with adverse conditions such as fog or lack of light. Heroes' Rest is not a particularly sunny area, but this does not prevent skull archers from being elite shooters. They also keep a fast reload speed at any time.

These enemies can be a threat to any regular adventure, but not for the King of Darkness. The abilities of the cursed monarch allow him to fight the Skeleton Army without trouble. Using jump and dash moves, the King of Darkness can doge the arrow shots, getting closer and attack using the sword. One of the main weaknesses of the skull archers is the lack of melee options. However, they can also use dash moves to get to cover and avoid close-range combat.

The best way to deal with skull archers is by using their reload times to get beside them so they can't strike back. Jump over platforms and use the dash skills to avoid incoming arrows. Keep in mind skull archers will try to dodge you as soon as you get close to them so speed key to destroy them quickly. Give them a taste of their own medicine and shoot them arrows while you are getting closer. Once you are face to face with them a couple of well-placed sword attacks will be enough to take them back to their tombs. 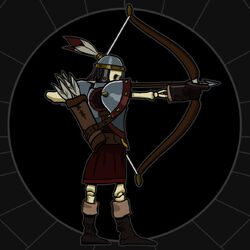 A skull archer ready to shoot