Shotgun goblins are inhabitants of the Ascension Cave, and represent the basic grunts of the goblin army. They are very common near goblin settlements, guarding the main entrance, but they also can be found far from their land as scouting troops. They obey blindly the Goblin King and attack any outsider without hesitation.

Like other kind of goblins, they have green skin, pointy ears and sharp teeth. They wear red or yellow headscarfs to differentiate themselves from other goblin warriors, but their main characteristic is the shotgun they use with extremely good aim. Their weapon looks like a classic musket with modern features.

The shotgun goblins can hit a target from a far distance. They don't miss a shot unless their victim has good reflexes and moves fast. They can manipulate their ammo to shoot one single bullet or a projectile that can be divided into three.

However, the time they need to reload their weapon is too long and makes them very exposed until the shotgun is ready to fire. They lack melee combat skills, so they can not offer any resistance when confronted by nearby opponents. Shotgun goblins are deadly at the distance but weak at close rage.

Use the environment to avoid their shots and get close to their possition. You can jump between the platforms or use the arrow mechanic. Wait until they need to reload the weapon to jump in front of them and start with melee combat. You should have no problem to finish them before the shotgun is ready again. 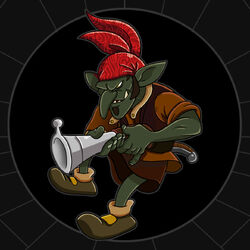 Screenshot of a shotgun goblin just after opening fire