Rooks represent the ultimate evolutionary step of the creatures that populate the main chamber of the Light Tower. Their huge body is the result of mixing mechanical parts with the essence of the light itself. Rooks movement speed is a bit slower compared with how the queens and bishops fly across the level, but that doesn't make it less dangerous. It is very common to see patrols of these creatures near falls and gaps.

Rooks can be described as flying strongholds. Their armoured body has multiple layers of lighting energy capable of repelling even the most powerful projectile. In addition to these incredible protection skills, rooks can use their extremities as an attack and a shield at the same time. Instead of arms like other celestial beings, they have multiple six tentacles that create a sphere of shield around their bodies. These whips resist attacks and also can rest multiple health points.

Despite lacking arms, their general appearance is very close to other creatures made by light. They have wings to fly through the different height levels of the Light Tower.

Some explorers are not sure to catalogue these creatures as aggressive beings due to their behaviour in front of an outsider, a demeanor very similar to the slime crystals movement an attack patrons. These celestial life forms can not attack directly, unlike queens do with their homing projectiles. Considering their moves and attacks, rooks have an instinct of protecting the lighting but have no long-range combat option, which makes them a less threatening enemy than other celestial entities.

Despite that, all experts agree in a particular point: rooks are dangerous. They are impossible to hit while their whips are activated. The only chance to damage them is by using arrows while they haven't seen you yet. Rooks like to fly near cliffs and the edge of platforms to force their opponents to a close encounter with them.

Rooks do not behave the same way as queens or bishops, so the best tactic to deal with these flying fortresses is considering them mobile platforms. The King of Darkness can use rooks to cross the Light Tower, getting around high grounds and reaching distance platforms. Using the jump attack, he can avoid their whips and stay safe. 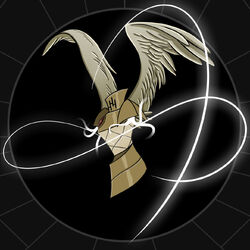 A Rook activating their whips

The King of Darkness using rooks to jump across a gap