Queens are celestial life forms that inhabit the Light Tower. Like any other creature of their kind, they are half-machine life forms with a hive mind. Considered the next evolutionary step of the bishops, they were born from the Light itself with the unique purpose of defending the energy lighting at all cost. Queens inhabit every corner of the tower, flying around and keeping the area free of intruders.

The armour that covers their body keep the light essence inside and proves protection among many other features. Queen's body shield can resist multiple hits, but its most tough piece by far is the battle helmet. Celestial creatures stores their biological material on their heads, that's why the helmet is so important. Wings are also part of their appearance and are their only body part not covered by armour.

Queen's armour is a bit special compared with the protection use by bishops. Once they detect an enemy, queens use their plane shift skills so they become intangible as they move and take their victim by surprise.

These celestial beings act a bit different than other of their kind. Queens don't have melee abilities, so they must keep a distance with their enemies if they wish to defend themselves. This means they use powerful long-range attacks when they detect intruders, which combined with their flying skills, makes them a serious threat.

Despite being natural born killers, queens can be confused by fast dashing moves and ara practically defenseless against melee attacks. These make them an easy target once you get enough close to them. Besides, once they shot their light projectile, there is a couple of seconds when queens calibrate their plane shift systems, which is the perfect time to strike back.

They will follow all around the Light Tower once they detect your presence, so standing still is not an option. Queens use plane shift skills to move through the area, shooting them arrows is useless because they are ethereal meanwhile. The King of Darkness can only hit them after they stop moving. Wait until they shot the light projectile and attack them with wherever you have. Try to not take too long, because after a few seconds they will be plane shifting again. 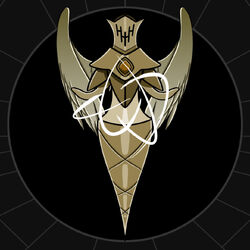 The King of Darkness avoiding the homing attack of a queen