Time has buried his real name, and no one has been brave enough to ask him. Only the elder Chronicler knows it, among many other details of his life, but those are well-hidden secrets. Long ago he was the ruler of a huge kingdom, one of the two main factions that divided Aeterna. But the conflicts with his rival empire and the hatred between him and the queen of his nemesis nation enraged Chaos, supreme god, and cursed both leaders with the gift of immortality.

Since then, he would be known as the King of Darkness, the one who never dies, a cursed warrior that fights an eternal war against the Queen of Light to reclaim the throne of Aeterna and keep the balance between light and darkness.

He is recognizable at first glance. His ashy long hair and pale skin are unique and can not be found in other life forms, human or monster. Despite being hundreds of years old, the King of Darkness looks young, athletic, and has an attractive semble. This appearance is the result of having the gift of immortality. No matter how many times he is injured, mutilated or apparently killed, he never shows scars or any kind of ravage over the skin. Only the pain of his emotional wounds is what remains as time continues to pass and the world around him keeps changing. He rarely shows any emotions.

The King of Darkness always wears a black and golden armour, which has protected him since his early days as a war lord, back when he was still mortal. On the breastplate is the coat of arms of his former kingdom. He also carries a white and red cap, a present from one of his former generals after a battle against the queen's army, and use a powerful sword for close-range combat. Like his master, the cursed weapon has cost the lives of countless enemies. The sword emanates a haunting purple light and has been on his lineage since the first dawn.

It is unknown why everyone calls him the King of Darkness, but a legend tells it was Chaos himself who choosed his name. He was born in a well-positioned and wealthy family, son of powerfull duke. He had no siblings, so the rights over his parent's lands were all him. At the age of seven, he learned how to fight with the sword and start training to become one of his father bodyguards. During that period, Aeterna was fragmented in several kingdoms and other independent states that used to have good commercial relationships and live peacefully for the most part. It wasn't until the future King of Darkness took the place of his father as the new duke that everything changed.

One nation after the other was conquered by this well trained army, creating a huge empire with lots of territories under its rule. Other kingdoms started doing the same, attacking their neighbours. Only the most powerful were succeeded, the rest were annexed by other countries. A decade later, the world of Aeterna was controlled by two main factions. Then a cold war started, and tensions between both contingents did not stop growing. It all ended with the inevitable great war that shook the foundations of Aeterna and killed thousands of innocents.

Chaos, supreme god and creator of the universe, was deeply disappointed with the behavior of the mortals, and decided to punish the leaders of the two factions in conflict. He condemned them to fight each other until the end of the days, to keep the balance between good and evil. In order to prevent they will never stop the fight, Chaos also cursed both rulers with the gift of immortality, so even death could not free them from their punishment.

The supreme god wanted to stop the conflicts in the world he created, so each time one of the cursed leaders defeats the other, the winner takes the throne of Aeterna, and the opponent must reclaim the power by recovering their power and reaching the castle and starting a duel. A cycle starts when one ruler sits on the throne and a cycle ends when either the King of Darkness or the Queen of Light are killed and reborn. Once they start their reign, they are allow to wear a crown, a purple one for the King of Darkness and a silver one for the Queen of Light. 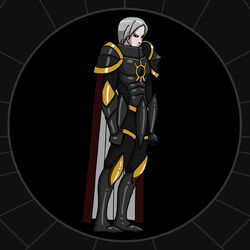 The King of Darkness stands still. You can appreciate all the details on his armour, including the coat of arms and the cap 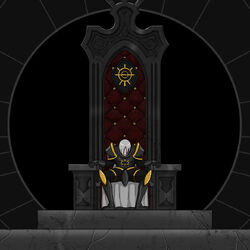 Remnants of his legacy, these thrones can be found all over the land of Aeterna. The King of Darkness can upgrade his abilities by sitting on them 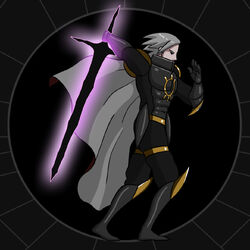 His sword is a powerful weapon. The King of Darkness can tear apart any enemy senseless enough to get on his way.

The King of Darkness can use the dash move to avoid incoming enemy attacks but also pass through gaps and traps
Community content is available under CC-BY-SA unless otherwise noted.
Advertisement