As his name suggests, the Goblin King is the ruler of the goblin people and one of the main characters that inhabit the Ascension Cave. He is not an enemy, but under his command is the entire goblin army, from shotgun goblins to dangerous flamethrower goblins. His kingdom includes the goblin settlements and the area around them. He reclaims the ancient territory of his people, a land they had to abandon due to a huge creature that terrorized their ancestors.

The Goblin King is old, big and fat, as every monarch should be, and he has all the characteristics of a goblin, but multiplied by three. His teeth are doubly sharp, his ears are pointer than usual, and his skin this way more green compared to other goblins. He always wears his golden crown and a large diamond pendant over his neck to remember his status and intimidate his minion and any outsider brave enough to talk to him.

He doesn't trust anyone except his faithful dragon pet, who is always near him and likes to sleep at his feet. The only beings that can be close to the Goblin King are his two royal servants, one to feed him with all kind of luxuries brought from every corner of the world, and other attendant to fan him.

There are few details of his early years of life and childhood. It is known that all of his ancestors were leaders of the goblin people in different periods since Chaos created the universe. His grandfather was the king when a misterious creature kwnown as Wormorok was discovered, forcing goblins to migrate to other territories.

There is a popular legend that suggests he killed his brother, the true heir to the throne, so the line of succession made him the new king. The elder archives say his brother died during a hunt due to the explosion of a slime crystal, killing him instantly. At least that was the report from the future Goblin King, who was the only witness of that terrible incident. Soon after he was crowned as the new monarch. Since then, no one has dare to talk in public about this, and for good reason. Those who question the official version of the story are executed.

The Goblin King is the only non-agressive NPC of the Ascension Cave. He has just one mission for you, but is one of the most important to complete on this game area. This task is called "Clear the Path", and it also serves as a final boss fight for the area. Once you reach him at his throne after a few encounters with his loyal minions, he will ask you to arrive at the former land of the goblin people and clean the path to the old village. He will demand a proof that the task is completed and will also offer a good reward for the King of Darkness. 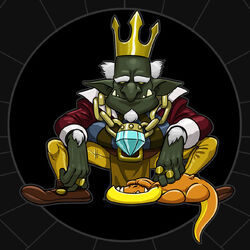 The Goblin King and his dragon pet

The Gonblin King speaking to the King of Darkness