Geodes are part of the fauna that inhabits in the Ascension Cave. These beings are considered the next evolutionary step of the golems due to the genetic similarities between both species. Despite being close relatives, Geodes are usually organised in small grounds so they can ambush and enclose their preys. They can be easily found near waterfalls and flying around high cliffs far from the dangers of the surface, guarding crystal keys and other important items.

Many adventures have described these creatures as "crystalline flying balls" and for a good reason. Their body is a sphere composed of multiple pointed crystals, very similar to the golem's shape but without arms and legs. Geodes have no limbs or visible organs. The only thing that stands out of their sharp and spheric body is a pair of white eyes. They can hover thanks to their light crystals and respiratory system.

Like any other native creature from the Ascension Cave as the slyme crystals, geodes can shoot crystalline bullets. They usually blast four crystals, one in each direction, while they fly and rotate over themselves. This flying movement makes them hard to hit so they can avoid easily most of melee attack.

However, the crystals they shoot are not homing projectiles so they can not direct their attacks to a specific target. Unlike other wild creatures from the same area, their crystalline shield is not very resistant. A well-placed arrow shot can break through it without trouble.

Trying to hit them could be inefficient if they are hovering very high, but sometimes melee attacks work fine against them. Nevertheless, the arrows are the best option to deal with geodes. Use the teleport mechanic to avoid getting damage form their projectiles and hit them. Due to their easily breakable shield, you won't need many shots to finish them. If they attack in large numbers, try to reach their positions as quickly as possible. 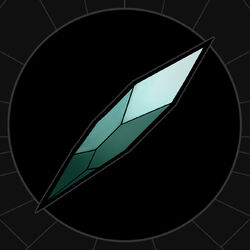 A geode attacking the King of Darkness. You can appreciate the four crystal bullets fired at the same time