Bats are common wild creatures in Aeterna. Almost every world is populated with several subspecies of flying mammals, but the ones that inhabit Heroes' Rest are some else. Flying leeches are bats located in this huge graveyard. They are bigger and faster than other of their kind and have a particular taste for human blood. Due to the amount of skull warriors and other undeaed creatures with corrupted serum on their veins, and insects like stalking spiders in the area, these bats are desperate for fresh blood, so they attack without hesitation any living creatures that pass through the walls of Heores' Rest.

There is no major difference between a normal bat and a flying leech. Their wings are flexible and allow them to fly over high platforms, waiting for the right time to attack. These huge bats like to rest upside down and hanging from the ceiling. As mammals, they have their entire body covered by thin hair. Their main characteristic is the pair of sharp and big tusks that they use as a weapon. Flying leeches live up to their name by sticking the fangs into the neck of their victims and sucking all the blood until they are satiated.

They have big ears to support their echolocation system. Their eyes have serious difficulties in bright environments, so they use their ears to detect obstacles and potential victims.

Due to their flying skills and the lightness of their body, these bats are hard to hit using swords, pikes or other melee attacks. They are bigger than the rest of bats, but they are still small targets for a human, which makes them even more difficult to hit. Flying leeches are also sneaky and can catch you by surprise if you don't pay attention to what's above your head.

Despite their fast movement speed, they can't dodge in-coming projectiles like magic arrows. Their limited range of vision in exterior or bright areas is an important weak point. They are dangerous in deep crypts and dark tunnels, but they have problems to identify a target when they fly in outside levels.

You'll be safe from these little vampires on the ground or low platforms, but as soon as you start to climb the odds of running into flying leeches will increase. Once they detected you, they will fly towards you to beat and start sucking your blood. Use the das to reach other platforms and make a couple of shots to rest some of their health points before the melee combat begins. Just another two hits with your sword and they will be doomed. 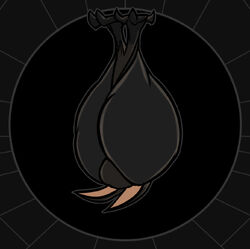 Flying leech resting and waiting to the right time to attack

Flying leech over the King of Darknes. The screenshot has been taking in one of the exterior crypts in Heores' Rest