Flamethrower goblins are the elite forces of the Goblin King personal guard. These soldiers can be a real threat to anyone unfortunate enough to be in front of them and represent the most deadly troops of the goblin army. It is very common to locate them near goblin settlements, protecting their home from outsiders and wild creatures, but some of them can even be found in the remotest areas of the Ascension Cave leading patrols of shotgun goblins.

Dark and green skin, pointy ears and sharp teeth, there is no big contrast between the appearance of these goblins and other of their kind. The main difference is their body armour, heavier than the one used by the regular grunts and, as their very name suggest, the flamethrower they use in combat. This dangerous weapon has three different parts, the gun itself with a trigger and an iron sight, the fuel tank on the back and the hose that connects both of them. Flamethrower goblins also wear special glasses very similar to shoseones used by dynamite goblins in order to protect their eyes from the light of the flames.

Their weapons have a long-range of damage. Flames can't reach as far as a shotgun bullet, but they can damage enemies not only at close range but also at medium distances. They are practically invulnerable from the front while the flamethrower is operating. The fire creates a natural shield over any kind of damage.

While the front is unbreakable, the back, where the fuel tank is located, is their main weak point. The flamethrower is lethal but rough, so it usually malfunctions after a few seconds firing, making the user an easy target.

Do not face them directly because they will start firing as soon as they detect you. While the flamethrower is activated, avoid their attacks using the dash move or the arrow mechanic to reach the high grown or get behind and hit them a couple of times before they range you. The best moment to deal with a flamethrower goblin is when the weapon starts to malfunction. Use melee attacks to kill them before the weapon is operative again. 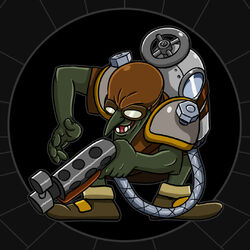 Flamethrowers tent to malfunction, wich makes the goblin vulnerable for a few seconds.