Dynamite goblins are the most dangerous minions of the Goblin King. They are a serious threat even for the most experienced adventures and can kill you instantly if your health is low. It is very common to find dynamite goblins in mixed patrols with shotgun goblins and flamethrower goblins protecting the main paths to their settlements. They don't mind to be used as cannon fodder, they enjoy it by due to their crazy behavior.

Green skin, sharp teeth, and ears bigger than usual. Dynamite goblins have an excellent sense of hearing and can detect footsteps from long distances. They lack any kind of self-preservation, their only goal is to blast any outsider, no matter if it risks the safety of their comrades or their own life.

They wear light clothes to ensure a fast movement speed and a pair of glasses to not to be blinded by dust particles. Their main characteristic is the huge stick of dynamite they carry on the back. They light the fuse themselves before start running towards their victims screaming nonsense words.

They are one of the fastest enemies in Aeterna Noctis. Once they notice the pressence of an intruder, they never stop the chase until they catch their target or crash with a wall, exploting and dying instantly in both situations.

Dynamite goblins are deadly but weak at the same time. Having no armour makes them extremelly exposed to arrows and melee attacks. They can not reach the platforms and high grounds of the Ascension Cave once they get crazy and start running, so jumping at the right time is essential to avoid them.

Try to not get trap between a dynamite goblin and an impassable wall. Jump and use the dash move to doge or the teleportation arrow to get behind them. It is very important to not get hit by them. Even if the explosion does not kill you, dynamite goblins are rarely alone, and their damage can make you an easy target for other nearby enemies. Remember, once you hear the wick, it is time to run. 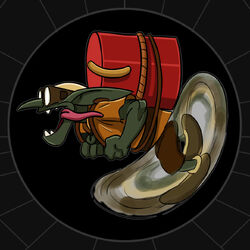 Dynamite goblin running towards an enemy