Drone worms are creatures that inhabit the deepest tunnels of the Ascension Cave. They are disgusting beings that inhabit the path to the old goblin village, but can also be found in more surface levels due to how easy is to them to move around without being seen. They are very dangerous in large numbers and their maws can rest several health points if the King of Darkness is caught by surprise. Drone worms love blindly and obey the commands of the giant Wormorok. They always arrive when their mother screams in pain and need help. The mother gives orders to them trough a hive-mind system.

A large and thin body of gelatinous texture with a sharp maw at the beginning, that would be an accurate description of the average drone worm. Despite having no armour shield, they can resist multiple hits due to the elasticity of their skin. They use the maws not only as a weapon but also as a digging tool to open new tunnels and make their way through the Ascension Cave.

Worm presence can be immediately recognisable due to the yellow eggs the mother has planted over the walls. These chrysalis shape huge piles that destroy crystalline formations and gives a nightmare image.

Drone Worms can attack alone but they usually outnumber their victims assaulting in large groups and by surprise. That makes hordes of these little worms a dangerous threat for unprotected adventures. It is possible to find a drone worm disorientated that has travelled to the superior levels of the Ascension Cave, but the temperature and presence of other creatures like goblin troops or crystalline beasts like slyme cristals and golems make the deepest tunnels the best choice for their survival.

They have no long-range attacks, so once they have surfaced they can only hit what is nearby. Besides, they are very exposed moments after surfacing, when they must adapt their vision to the candles and bright of the crystals, which makes them an easy target for a couple of seconds.

Beware of the ground. When the worms crawl they emit a very characteristic sound and shake the ground around them. This signals will allow you to anticipate their attacks. Once they have surfaced, use the arrows to hit them from the distance or jump upon them to use melee attacks. Reaching a high position can also be very useful. 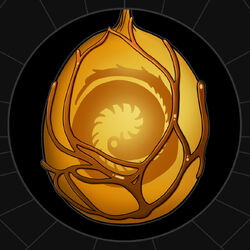 A worm egg hanging from the ceiling. You can appreciate the larva inside

The King of Darkness defending against a horde of drone worms